Those Who Have Gone Before

Today would have been my mother's 72nd birthday.  This is a picture of her, my grandfather, and my Uncle Larry.  I'm not sure when it was taken.  I found it in a bunch of her stuff I was going through. 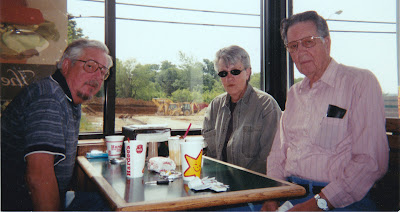 None of them are with us any more.  Larry passed away about six months before Mom did.  It was kind of sudden.  Mom passed in 2010.  We just buried my grandfather on Tuesday.  My family is getting smaller.  I know it's supposed to happen, but it's still disconcerting.  I am now the oldest member of this particular branch of the family tree.  There's nothing that prepares you to have that thought.

I know that's what my Uncle Mike is feeling right now, too.

When my great-grandparents died in the late eighties, I remember thinking that, because they died in their late 90's, I'd have a long time to spend with my family.  After all, my mother had over 40 years with her grandparents, and my grandmother had her parents in her life for over seven decades.  It was comforting to come from a long-lived line.

It was not even ten years later when my grandmother died, blowing that idea out of the water.  I am the oldest grandchild, and she and I were quite close.  At the time, I thought it wasn't fair that I didn't get nearly as much time with my grandmother as my mother had with hers.  I was barely in my thirties!  It was only later that I realized my mother had much less time with her mother as well.  She died rather suddenly, and it was a loss that still affects me in some ways.

My father died at 75, but my mother was in her late sixties.  Again, I got a lot less time with them than prior generations in my family had with their predecessors.  In fact, it was actually kind of disturbing:  from late 90's (my great-grandparents) to 80's (my grandmother) down to late 60's (my mother).  It seems like each generation was getting less and less time!

My grandfather passed away at home, which is what he wanted.  I'm glad he was able to do that.  He made it into his 90's, so he kind of restored the longevity of our family.  He also still had all that hair when he died.  That kind of gives me hope.

I was privileged to be at the bedside of both my parents as they passed.  I got to have a private, final moment with both of them.  As much as I wish that those passings had not happened, I am thankful that I got to be there.  I got to say good-bye.

Shortly after my mother died, I was standing in the graveyard with my Uncle  Mike.  We had gone down to take care of the settling of the estate and stopped by the cemetery.  As we were walking from grave to grave, he turned to me and said:  "There are an awful lot of people in here that I used to sit around the Thanksgiving dinner table with."

And now there's one more.  Some parts of getting older stink.  This is the stinkiest of them all.

I'll be celebrating her birthday this year by going to the big flea market at the fairgrounds.  It's one of the things we used to do around this time of the year.  We'd either go at Memorial Day or the Fourth of July.  It was kind of our Mother's Day/Mom's Birthday get-together all rolled into one.

In the last Indiana Jones movie, there was a line that struck me that said, "We've come to the point in our life when God stops giving us gifts and starts taking them away."
Yesterday marked a year that my father-in law passed. We're now living in his house and memories of him and his wife are all around us. I just hope they don't mind we painted their house blue.

What a great post to honor those people we no longer have with us.

We still have my husband's Dad who is 89 and up until about 5 years ago still carried his own canoe and took mostly men bear hunting in northern Minnesota!

I hope you find some good stuff in memorence of your Mom.

Feel your pain at several levels. My mom died in 2011, and since both my parents were only kids, I'm the eldest of a pathetically small tribe - wife, daughter, two sisters with a daughter each, and my eldest nieces husband.

What a nice post, Eddie. I know what you mean about this time of life and losing people. It's scary. My husband had a HUGE family when we got married. Now, his grandmother, all his aunts and uncles and his parents are gone. I can't even watch our wedding video anymore - hardly anyone it in is still alive.

Have fun at the Flea market - I know you Mom is there with you somehow!