I'm going to try something a little different with this edition of the Rambles.  Behold, the Rambling pictorial!

This sign in the building where I work cracks me up.  I've never been in there, but I imagine that it's full of people waving their arms around as they "handle" the air.

One of the teachers I work with did this review drawing for people in his class.  I thought it was really funny (and well done), so I wanted to share it.  I think the sad faces on the guys getting sliced kind of make the whole thing. 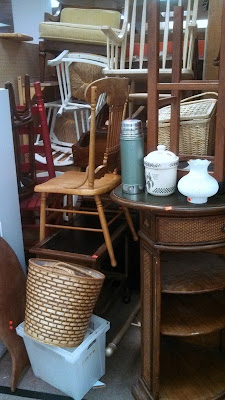 This would be a prime example of how not to stock your booth.  This is a new vendor at the mall, obviously.  The manager has already called him to come in and redo it.  She said she told him "You'll never sell anything like this." The booths on either side of him are nicely put together, so I don't understand how he could come in and just throw things in like this.  It's an 8x10 space, by the way.  It's totally crammed full! 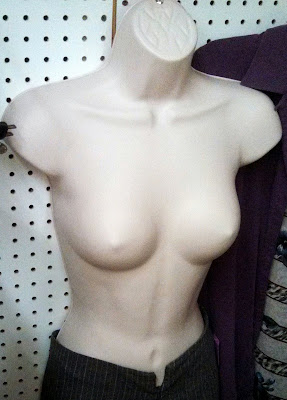 Brazen Indecency!  I saw this in a vendor mall on the road trip we took on Saturday.  More on that in a few days.

Stuff I Did Last Week

I really have no room to talk about other people's booths.  My own displays stink, but you can get in my space and get to items.  I was kind of proud of this little vignette I created with some vintage AnnaLee clowns.  Maybe this will finally get them to sell!  Those little bastards need to go!

I had high hopes for some weekend sales at the booths, but they didn't pan out for the most part.  It was the 4th anniversary celebration at the Peddler's Mall, so I had a sale and everything, but only had normal sales.  Those special days used to be a guarantee for a hundred dollar day, but not any more.  I did, however, sell those vintage lamps at YesterNook--finally!

I'm also waaaaay ahead of last month's sales, so I really can't complain too much.  I almost have rent made!

Not too terribly much, actually.  The thrift downstairs from the Peddler's Mall was having a sale, so I did pick up a couple of things. 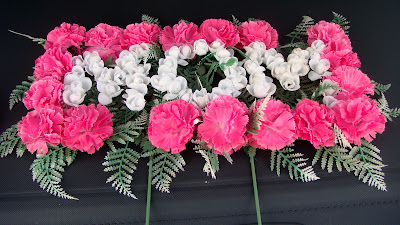 Part of the reason for the road trip was to put new flowers on Mom's grave, so I had to get this.  What an odd thing to donate to a thrift!  I wonder who made the donation?  Sometimes you just wanna know the story behind the stuff you see.

It's kind of a gag gift, since it's not something that Mom would ever want on her grave.  In fact, I know it's something she would hate.  She always fussed about stuff like this whenever we'd go to the cemetery.  We've always had this tradition of getting each other things that we know we can't stand as gag gifts.  I see no reason not to continue, even though she's gone.  She would have laughed about it.  for the record, I did get some nice flowers to put out too.

What's Going on This Week

I'm gonna be busy this week.  We're back to the regular routine at work, after a slight slowdown for summer.  I also have to do to the dermatologist to get a mole checked out.  We've been watching it for a few months now.

I'm also in the middle of the countdown to the last chemo, which is next Tuesday.  I have a mixture of anticipation and dread like you wold not believe.

Blogs for This Week

I'm starting my series on Days of Our Lives tomorrow, so if you don't like my soap opera babble, you can skip tomorrow, Thursday, next Tuesday, and next Thursday.  I've only wanted to do this since January, so I'm glad it's finally done.  I think it came out pretty well.  The hardest thing about writing about soaps is having to change what you've written because something happened on the show the day you finished your piece to invalidate everything you worked so hard on.

Friday is my 1,000th post.  I have a special piece written, so please come back and check it out.  You can skip the soap babble, but not the 1000th!  It's only taken me 10 years to get there.  On Wednesday, I'll start recounting the road trip adventures.  Something special happened, so you don't want to miss it.

As long as I'm talking about the soaps, how about last week's Days?

I was a little disappointed in the way EJ's takeover of the DiMera holdings came down.  It was very anti-climactic.  We could have at least gotten a board meeting vote out of it!  I thought the reaction scenes with Sami and Adrienne were nice.  (OMG!  Those two are agreeing on something!)  Must every fight Sami and EJ have end in steamy sex?  I get that these two are combustible together, but it's getting old.  It does kind of underscore for me why they'll never really make it as a couple.  Passion that intense consumes everything it touches, including the participants.

Speaking of consumed, Kristin's meltdown at the church was fun.  It's not often you see characters screaming at pictures of Jesus.  Maggie had some nice, meaty scenes with Daniel and Brady this week.  I especially liked the ones where she and Brady talked about addiction and love.  I don't mind as much that she doesn't have her own story when she gets to do stuff like that.  I wish she would interact with Lucas and Will a little more.

Finally, there were some nice twists to the stories.  JJ's mystery woman (Teresa) is Kim and Shane's daughter!  She's also a bad seed Brady and she's teaming up with a bad seed Horton!  This could be really good, if they do it right.  Even better, Rafe wakes up and thinks Sami shot him.  I love this new twist to an already twisted story, but they need to tread carefully or it could turn into one twist too many and the whole thing will collapse.  I think it all hinges on Kate and how she uses this situation.